Posted on January 5, 2010 by larryhamillphotography | 14 Comments

The year 2010 rings in the 20th year of our Columbus Skyline poster calendar, with this year’s skyline framed by Costa Rica’s golden mountains and the jagged Bryce Canyon.

After experimenting with a beta version of Photoshop, Larry created the first skyline calendar in 1991, using Photoshop’s first edition software. That year, Larry also coined the term, photilation, to describe his creative process of combining photography and illustration.

The 1991 edition featured the San Gabriel Mountains in California with a Costa Rican shoreline. Having traveled to exotic locations including Bali, Namibia, China and Ecuador, among others, all stock photography incorporated into each year’s calendar was photographed by Larry. 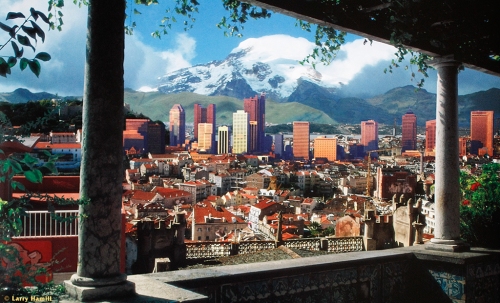 Intended as a fun piece with a practical application, each year the calendar has been embedded with faces of friends, family, pets and an assortment of other oddities.

In 2000, the Alhambra in Granada, Spain served as the foreground with the Lewis mountain range in Glacier National Park serving as the backdrop. Portraits of local celebrities, Fred and Howard, who formerly owned the Hausfrau Haven in German Village, can be seen in the Alhambra’s arches. 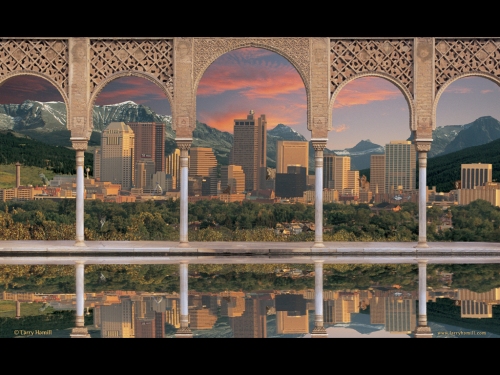 Over the years, Kreber has supplied the color separations, while printing services were provided by Century Graphics, who sadly closed their doors last year.  This year’s calendar was printed courtesy of Richardson Printing Corp. along with Millcraft Paper. 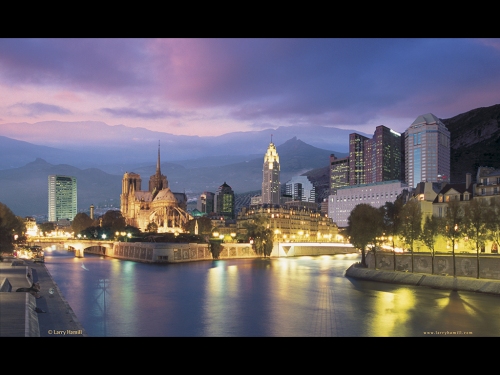 2001 The Seine River in Paris with mountains from Jaen, Spain © Larry Hamill

In keeping with a tradition started by Fred and Howard years ago, the 2010 Columbus Skyline calendar is available at Hausfrau Haven, located at 769 S. Third St. in German Village.