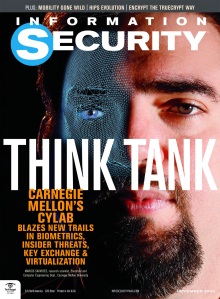 Maureen Joyce, creative director at IS Magazine, notified us of the honorable mention in the category of Front Cover – Digital Imagery. We produced the cover image of Marios Savvides, last fall at Carnegie Mellon University’s CyLab.

Through the use of algorithms, Savvides is developing facial and iris recognition software at CMU’s biometrics lab. In the article entitled, Think Tank, Michael Mimoso writes that “it’s no surprise that most of this work is earmarked for use by certain three-letter government agencies…since criminals and terrorists are experts at evading detection.”

The 2009 Tabbie Awards received 500 entries, with nominations coming from the U.S., Canada, the U.K., Australia, France, China, The Netherlands, New Zealand, Singapore, South Africa, Germany and India. According to TABPI’s website, “judges were once again impressed by the quality of the submissions”.

Let us know what you think of this image and/or the growth of technology in monitoring society. Will Big Brother watching out for us come to be viewed as a positive influence on our quality of life?